A Year in Review: Presidium 2019 Awards

For Presidium, 2019 started on a high note with earning a spot on Multifamily Leadership’s national list of Best Places to Work Multifamily™ for 2019. As the year continued, the company received national recognition for many of its properties throughout Texas, its superior workplace environment and its fantastic leadership team.

“We make a point of fostering a quality company culture at Presidium, encouraging cooperation and collaboration throughout the workplace and rewarding those who strive for operational excellence,” said John Griggs, Co-CEO and Co-Founder of Presidium.

In January, Presidium was named as one of the Best Places to Work Multifamily™, an annual list published by Multifamily Leadership to encourage growth and excellence throughout the multifamily apartment industry. Presidium ranked sixth in the national program, recognizing the company for its outstanding workplace environment. Through a detailed assessment process, Multifamily Leadership evaluates each company’s policies and procedures, as well as responses from the company’s employees.

This past spring, Presidium was honored to have both properties and employees selected as finalists in the Sapphire Awards presented by the Apartment Association of Greater Dallas (AAGD). The firm holds finalists for Property of the Year, Property Manager of the Year, Support Professional of the Year and Executive of the Year.

The Verge Apartments, a multifamily community in North Dallas, and its manager Jany Guerra-Rodriquez were nominated for Property of the Year and Property Manager of the Year, respectively. Presidium’s Chief Operating Officer Lindsay Colbert received a nomination for Executive of the Year, as did Michael Kirk, Presidium’s Senior Marketing Manager, for Support Professional of the Year.

The AAGD is the second largest local apartment association in the nation. Its mission is to serve and support professional owners, managers and providers of multifamily housing through governmental advocacy, education and service. The Dallas/Fort Worth market has more than 1.2 million apartment residents contributing to an economic impact of over $25 billion.

In May of this year, five multifamily communities, all either owned or managed by Presidium, were named as finalists in the Austin Apartment Association Property of the Year Awards. Edison, an upscale, eco-friendly development in the Riverside District, was recognized in the Mid/High-Rise category. Element Austin and Solaris, both located in the East Riverside District, were finalists for The Ruby Award, which honors top properties built prior to 1989. Finally, Balcones Club and The Violet were honored in the Renovation category, recognizing properties that have undergone major physical improvements within the last five years.

The Austin Apartment Association is composed of diverse groups that represent and serve the rental housing community of Central Texas. Servicing an 11-county area in Central Texas, the organization promotes professionalism through education, provides a means of communication, participates in the legislative process and encourages mutual support of members, the industry and the community. 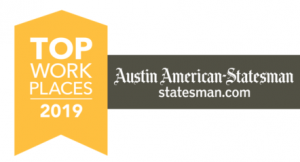 This past fall, Presidium was named a 2019 Top Workplace in the greater Austin area by the Austin American-Statesman. Presidium ranked 50 in the program, recognizing the company for its outstanding workplace environment.

Through a detailed assessment process, third-party research partner Energage, LLC, administers an employee feedback survey to more than 19 million employees from companies and organizations throughout Austin. The survey measures several aspects of employee engagement, workplace culture and employee alignment with their company’s vision.

This November, Presidium was recognized as one of The Dallas Morning News’ 2019 Top 100 Places to Work. Now in its eleventh year, the annual list spotlights employers who emphasize the importance of creating a positive work environment and company culture. Presidium ranked 31 on this year’s list.

Every year, The Dallas Morning News showcases local employers who go above and beyond, the list is based on an extensive culture survey that measures performance in leadership, sense of mission, career opportunities, company culture, and pay and benefits.

“Our Top 100 Places to Work brings a healthy competitive spirit to North Texas,” says Grant Moise, president and publisher of The Dallas Morning News. “I love the pride of companies recognized as a Top 100, and the motivation the competition gives to those companies that fall short so that they can make changes to crack the Top 100 the following year.”

Presidium finished 2019 off strong as they were recognized by the Bryan-College Apartment Association (BCSAA) at their Annual Awards Gala on December 6, 2019. Pearl Apartments, a newly renovated community minutes from the Texas A&M campus, was awarded “Conventional Property of the Year.”

The purpose of the Bryan/College Station Apartment Association is to further the professionalism, and integrity of the rental housing industry, through professional education, community awareness and affirmative legislative representation.

Innovation, integrity, persistence, honesty and basic common sense are the hallmarks of Presidium. Presidium operates its organization with the highest ethical standards and prides itself on always doing the right thing. It is often said that the “best way to predict the future is to create it.” Presidium looks forward to the future as it continues to grow and create countless opportunities for its investors, team members, and community members alike!